Will County CED Reflect on 40 Years of Growth 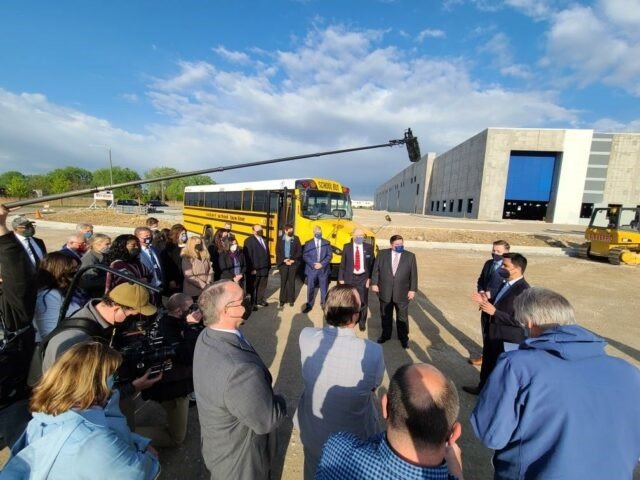 The highlight of this year’s annual Will County Center for Economic Development’s Eye Opener meeting was discussion of the new Lion Electric plant coming to Joliet. Earlier this spring Joliet Mayor O’Dekirk, Congressman Bill Foster, Governor JB Pritzker, Nate Baguio, from Lion Electric, and other officials attended a press conference to announce the company’s decision to build the electric vehicle plant in Joliet. (Photo courtesy of the Will County CED)

From job creation to infrastructure projects and housing, Will County is on top of the heap in Illinois.

That’s the message leaders of the Will County Center for Economic Development had at their recent 2021 Eye Opener annual meeting, which was held virtually. Will County CED officials cancelled the meeting last year due to the COVID-19 pandemic.

One of the big economic developments highlighted at this year’s event was the announcement by Lion Electric to build a manufacturing plant for electric vehicles in Joliet.

Lion is constructing a 906,000-square-foot all-electric vehicle manufacturing facility at 3835 Youngs Road. When completed, it will be the largest medium-duty electric vehicle production facility in North America, employing 1,400-plus people and with a capacity to produce more than 20,000 all-electric school buses and medium duty trucks a year.

Nate Baguio, vice president of sales for Lion Electric, said Lion selected Will County to build the new plant with “a lot of help from the CED.”

“At Lion, we move very quickly and we have to with what’s happening,” Baguio said. “There is a lot of demand for these vehicles.”

According to Baguio, it’s an exciting time for both Lion Electric and Will County and company officials are excited to partner with Will County as production at the new manufacturing plant in Joliet gets underway.

Officials kicked off the meeting this year by noting an important birthday for the organization.

“We are 40-years-old this year. That’s a very significant watermark,” Will County CED President and CEO John Greuling said at the start of the meeting.

The Will County CED provides everything from real estate information, economic data and research and market and labor force information to business incentives, project guidance, and infrastructure development.

“This is very critical for companies that don’t know much about Will County,” Greuling said.

Greuling has been with the CED since 1981 and recalled that unemployment was “skyrocketing” in the county that year and was at more than 26 percent in Joliet and 18 percent in Will County. Seven years later and unemployment plummeted to 5.4 percent and new housing construction began was on the rise.

Read the full article at: TheTimesWeekly.com