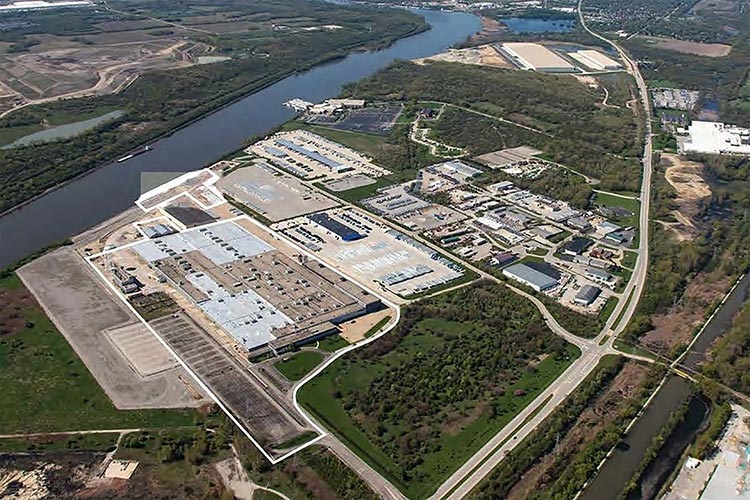 Industrial Realty Group picked up a sprawling industrial campus and trio of buildings outside Chicago, where Caterpillar once manufactured hydraulic equipment, to rework into a multitenant facility.

The 69-acre property that has been vacant for two years sits along the Des Plaines River in suburban Rockdale, Illinois, just outside Joliet, with good access to a number of intermodal transit sources. The 1.47 million-square-foot industrial site at 2200 Channahon Road includes a 1.3 million-square-foot facility, which was Caterpillar’s main manufacturing plant there, as well as two office buildings totaling 65,384 square feet. The purchase price was not disclosed.

Griffin Capital Essential Assets bought the property in 2014 for $57 million, when Caterpillar was still manufacturing hydraulic equipment there. But the world’s leading maker of construction and mining equipment closed the plant in 2019, about four years after it first began shifting jobs from the Rockdale facility to Monterrey, Mexico. Caterpillar was once the largest employer in a city full of blue-collar manufacturing employees, with 7,000 workers at its peak.

The Joliet submarket is still a mega provider of industrial space because of its “unparalleled accessibility and location,” according to CoStar research. The purchase is the first of many for Los Angeles-based IRG, with a portfolio of more than 100 million square feet across 150 properties nationwide. Last month, the company completed a $335 million bond offering through Goldman Sachs to fill its coffers with funds to recapitalize its assets and expand its industrial holdings in major U.S. markets. “We are certainly in a period of expansion, primarily as a result of our recent bond offering,” CEO John Mase said in a statement. “This is an exciting opportunity to combine IRG’s core competencies and convert a former Caterpillar facility from a single-tenant manufacturing facility to a multitenant complex capable of accommodating warehouse, distribution and manufacturing users.”

It also comes at a time when industrial properties are selling like hotcakes as soon as they go on the market or as they’re getting built. The sharp rise in e-commerce sales has upped the need for warehouse, distribution and fulfillment facilities everywhere, especially those with cross-country and last-mile access. “With new demand formation for big-box distribution space hovering around all-time highs, developers have consistently targeted the Joliet submarket, bringing nearly 30 million square feet of new supply to market over the past five years, including 5.4 million square feet during the past 12 months alone,” the CoStar report said.