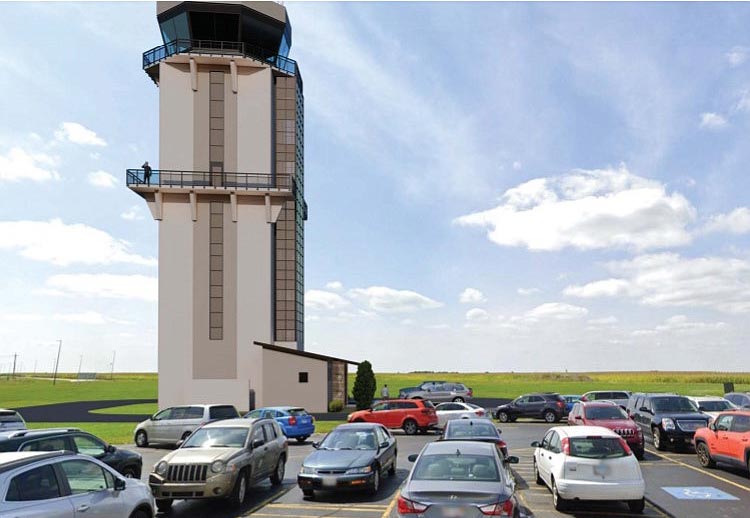 Construction is expected to get underway soon on a control tower for Lewis University Airport in Romeoville, and it could be a real economic boost for Will County and put the airport on the map for large corporations, according to officials.

“It takes us to a totally different level at the airport. This has always been part of the plan since the Joliet Regional Port District purchased the airport from Lewis University in 1989,” said Chris Lawson, the district’s director.

The district is awaiting some permits from the Romeoville Village Board and Lawson said the hope is to begin construction later this month on the control tower. A “cab raising” ceremony is tentatively planned for August or September, Lawson added. The cab is the top of the tower where Federal Aviation Administration certified controllers work from.

Over a decade in the making, work on the Airport’s first Air Traffic Control Tower is set to be operational in 2022. It is being funded with more than $8 million in FAA, State of Illinois and Port District grants.

Lawson said the tower is being constructed without the use of a tax levy. One of the recent grants the Port District received in 2019 – $3.3 million from the FAA’s Improvement Program to reconstruct Taxiway B, the airport’s main artery.

The grant completed the three-phase tear-out and reconstruction of the taxiway. The grant money also supported updating taxiway lighting.

“The Port District and our airport tenants and users, and the communities we serve, gratefully appreciate the commitment of our Congressmen and Senators in securing this final piece of Federal assistance to complete this critical pavement preservation,” Joliet Regional Port District Chairman David Silverman said regarding the grant funding.

Lewis University Airport is one of the top five busiest airports in the state and is located near three major interstate highways. The Airport is home to 150 aircraft – including 10 corporate jets, with annual aircraft operations of over 100,000.